If you’re a fan of the TV show M*A*S*H, you probably watched the final episode, titled ‘Goodbye, Farewell and Amen’.  And even if you are not a dedicated fan, chances are you might have tuned in for the finale.  When it aired on February 28th, 1983, 121.6 million viewers watched as the end of the show’s 11-year run ended.  More people watched this episode than the Super Bowl that year.

And yet, it pales in comparison to the number of people who watched the year 2020 come to an end.  With a global population of nearly 7.8 billion, it’s hard to imagine that all but a small percentage of that population were not ready, mostly happy, to put the year 2020 behind us.  He never liked saying ‘goodbye’, but I suspect that if Mike Farrell were to revive his M*A*S*H character, BJ, he would gladly say goodbye to 2020.

It’s not that absolutely everything in the year 2020 was bad.  At Anna’s Gourmet Goodies, there were plenty of reasons to practice my word for 2020 – grateful.  We were grateful that we managed to dodge the COVID-19 virus.  We implemented what are now being touted as best practices, early in the year.  We wore masks before they were recommended or required, kept our distance as much as possible, washed our hands obsessively and wiped down everything with sanitizer, for good measure.  Extra work for sure, but worth the price. 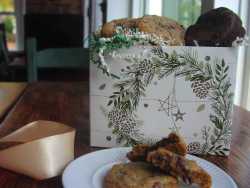 We had another record Holiday Gift Season.  While some customers were not able to send gifts this year, others increased their orders, particularly for remote employees.  And we made new friends as well.  For those customers that did not ship with us this year, we maintained that close bond, pulling for them, in some cases weeping for them, as their businesses struggle to navigate the pandemic.

The word ‘farewell’ is a fancy way of saying goodbye, usually reserved as an expression when someone is embarking on a journey.  This past year has been a challenging journey for so many people on so many levels.  Businesses trying to quickly adapt and learn to survive.  Families struggling not just financially, but emotionally, adjusting to new ways of doing the most ordinary of tasks.  And sadly, too many families saying farewell to loved ones who embarked on their final journey. 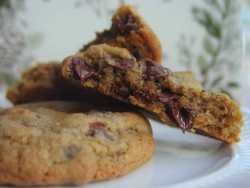 It does not happen very often, but we filled an order this year for 2-packs of cookies that were used as part of a memorial service.  We were asked to create a simple label with a photograph.  Out of respect, I did not ask any additional details about how or why.  We baked and shipped the order, hoping that in some small way, we helped the friends and family wish their loved one farewell in their final journey.

The word ‘amen’ originated in the Hebrew Bible.  It is most often used in Christian, Jewish and Islamic worship services as a conclusion to a prayer.  Colloquial translations of the word mean to express strong agreement or to verify something is true.

If you are a person of faith, you’ve probably used the word amen to mark the end of a prayer.  If you are not, you still might have used the word to mark strong agreement, or at the end of an event.  In either case, it’s fair to say that for many different reasons, people all over the globe are happy this past year has come to a close.  Some of us will emphatically add an ‘Amen’.  As Seth Godin replied in one of my emails, ‘here’s to better days’.  Amen.