It’s happened to me.  It’s probably happened to you.  And it has certainly happened to our customers who’ve sent gifts from Anna’s Gourmet Goodies.  Can you hear it?  Crickets. 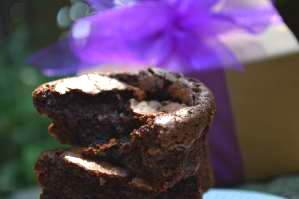 I’ve sent family members boxes of our cookies and brownies and never heard a word.  Recently Anna’s lost a customer after one order.  We setup a program for them to send thank you gifts to clients who spend a certain amount of money on their products and services.  They included a thank you card and a link to their site to collect comments and/or reviews.  Crickets.  They dropped the program after one small order.

We have more examples from Anna’s Gourmet Goodies and our gift business, but I suspect you have examples where you’ve done something for someone expecting perhaps some small measure of recognition and heard nothing but crickets.

I try to recognize someone’s thoughtfulness when I’m the recipient, but I’ve failed.  It doesn’t mean their actions did not have an impact, I’m grateful for the effort and do my best to pass it on.

In a prior post, I wrote about ‘The ripple effect of kindness’. It is an amazing phenomenon. While we don’t always see the end result of all our actions, we know that just as a drop of water makes waves in a still pond, the impact of acts of kindness, selfless service and thoughtfulness spread far and wide. 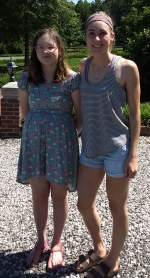 volunteered (okay I ‘volunteered’ her) to help with a project called ‘Educating Emily’.  August Turak the founder and Chairman, in what can only be described as an act of pure, selfless kindness, is underwriting the private education for Emily, the daughter of a contractor who works for him.  Anna spent time on Augie’s farm offering Emily her experience, advice and friendship.  Her small gesture was a ripple that may yield untold benefits someday.

Every summer we reach out to customers that typically order gifts from us during the Holiday season.  We try to come up with a unique way to connect in some small way as a reminder that they are more than simply a transaction.  We genuinely care about their trust and our relationship.

In thinking about what we might do this year, I was thinking about my experience at SKS and found a website for ‘The Kindness Rocks Project’.  It was started by Megan Murphy.  Megan walks the beach near her home in Massachusetts collecting rocks and sea glass.  One day, she decided to write messages on rocks, leaving them behind for people to find.  Unbeknownst to her, a friend was walking on the same beach, found one of Megan’s rocks, sent Megan a message with a picture and told her how it made her day.  She had no idea Megan wrote on the rock.  The idea and movement were born.

Putting these two things together felt like the perfect match for reaching out to our customers and sharing something we believe at Anna’s Gourmet Goodies.  I purchased several packs of cards with messages from TheKindnessRocksProject.com, 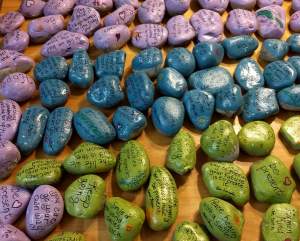 I must admit there was something therapeutic about sitting around the table at night and writing messages on these rocks.  Each one is unique, all done by hand.   I selected a group of messages from the cards and put them on rock, after rock, after rock.

Some customers received a note card with the story about Anna and Emily along with a Kindness Rocks card.  Some customers received rocks.  We reached out to just under a hundred of our Holiday gift and other regular customers, and waited.  While we expected a few responses, we hoped that tossing out rocks would create ripples in the pond. 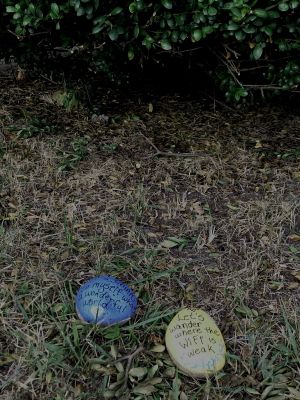 The initial responses we received were overwhelmingly positive. But then, over the next few weeks, more feedback started to trickle in.

We heard from Debbie and our friends at Fortress Financial.  It seems that Debbie and Marie both used the rocks as a learning experience with their grandchildren.  They left them in strategic places where they could be found and hopefully, make an impact on the person finding the rock.  This was a perfect example of what we hoped would happen – inspiring folks to spread the idea of kindness. 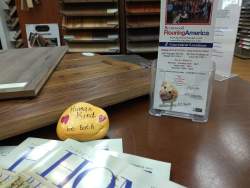 If you happen to visit Brentwood Flooring America in Raleigh, you’ll probably find a rock or two in various places around the showroom.  Brentwood is a long-time customer and shares a similar philosophy on the importance of treating everyone, especially their customers, with a little more kindness.

Finally, Debbie and I were having dinner at Sassool, one of our favorite restaurants started by the Saleh family and named after their mother.  I saw a sign describing how they adopted the Kindness Rocks Project in their business.  I painted a rock and paid a visit to Mounir to get his story.  Turns out they used this project as a part of their annual celebration with employees.  They let everyone paint their own rock, then scatter them around the Raleigh area. 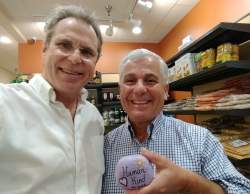 Anyone finding a rock could return it to Sassool in exchange for a free meal.

Mounir completely understood the bigger idea behind the Kindness Rocks Project.  Not only did he teach employees at Sassool about reaching out with an act of kindness, he understood that while not every rock would be returned, he was making an impact on others that could change their life in some way.  And for those who did return the rock, it was about sharing the values behind Sassool as a company, not just a free meal.

One of my favorite authors, the late Dr. Wayne Dyer said that ‘When you change the way you see things, the things you see will change’.  I wonder what would happen if we all changed the way we see the acts of service and kindness to others.  What if we saw the act as the reward with no expectation of anything in return?  What if we thought about planting seeds with no expectation of seeing the harvest?

As we head into the Holiday Gift Season, we’ll be sending out lots and lots of packages.  They’ll all contain our small batch, hand-made cookies and/or brownies, wrapped with love and care.  And while it’s likely that most recipients may not acknowledge the sender for their act, I am confident that everyone that receives a package from Anna’s Gourmet Goodies will feel the thoughtfulness and kindness of the sender.

Like ripples in the pond, we have no way of seeing the ultimate impact, but just knowing that we played some small part in getting something started is enough of a reward for us.